Get your instant online valuation from here. 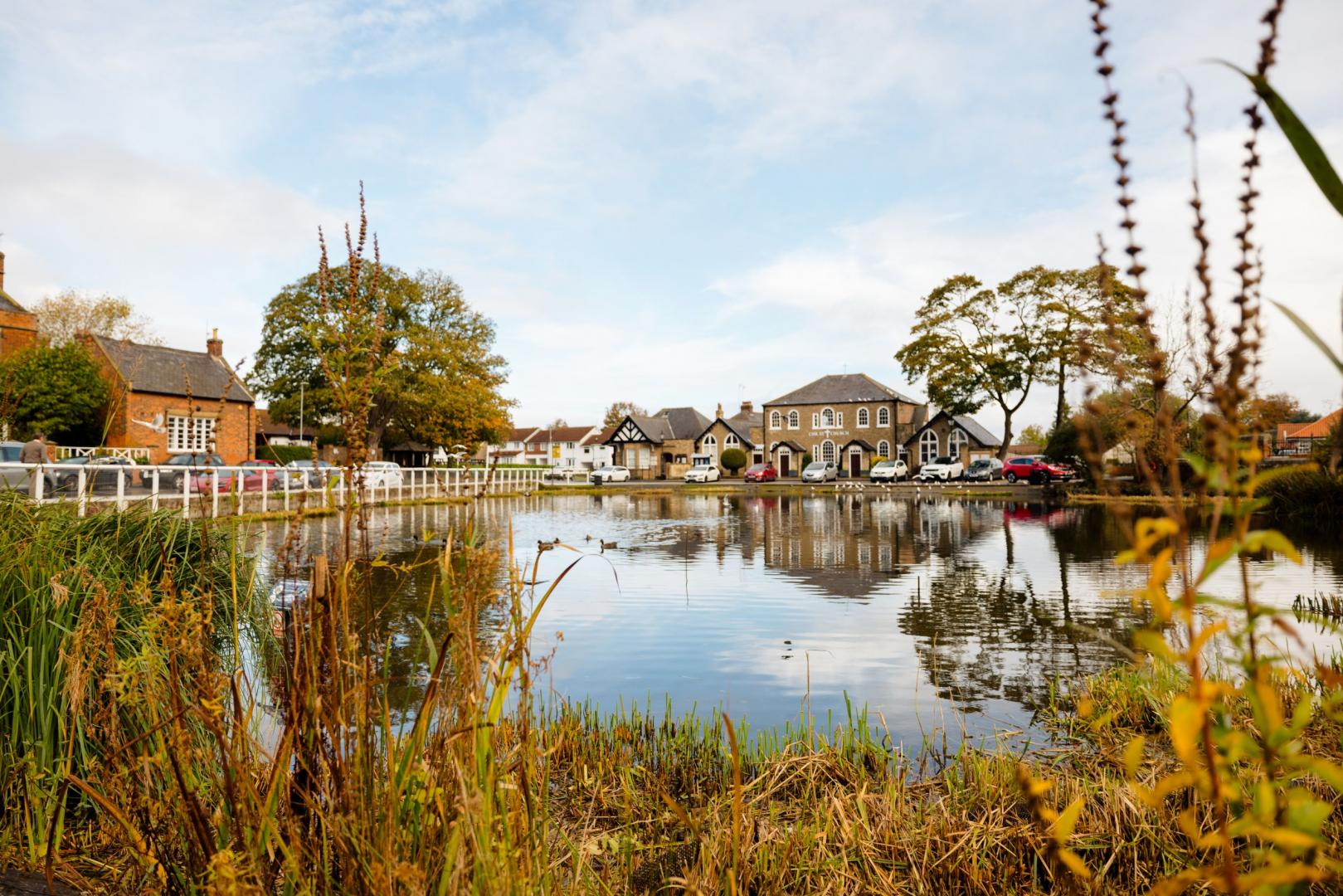 Hessle town and the villages of North Ferriby and Swanland lie just west of Hull. This area has excellent travel connections due to the A63 that cuts through North Ferriby and the A164 along Swanland, reaching Cottingham and Beverley. Connecting to major cities from the North Ferriby and Hessle train stations is easy, and it’s a fifteen-minute drive to Hull City Centre. The area offers a fantastic village lifestyle while remaining close to amenities. Hessle has many natural landmarks, including Whiting Mill – an early 19th-century windmill, the Humber Bridge Nature Reserve, and not forgetting the Yorkshire Wolds Way Walk. North Ferriby is home to the Ofsted rated outstanding South Hunsley School, while Swanland village has a stunning, greatly admired centrepiece pond. Whether you seek a fine dining experience at The Swan and Cygnet, a challenging round of golf or a day trip to Withernsea Beach, these areas all bring with them a dose of charm and tranquility.

Hessle is an ancient town dating back to the 6th century, and in Saxon times was named ‘Hoesellea.’ Hessle was the meeting place of political and legal matters, which were discussed and settled here. The geography of the sloping foreshore made it the ideal settling place for Anglo Saxon and Viking invaders to set up attacks inland. By 1801, Hessle was an attractive place to live for the wealthy merchants of Hull that wanted a home in a more rural environment.

There is evidence of human settlement in Swanland dating back to the Roman period, but it was during the 19th century, the village became an attractive area for wealthy residents to relocate, as it offered fine views of the surrounding countryside and particularly stunning views across the Humber Estuary. Substantial houses here included Swanland Hall, Braffords Hall and Swanland House.

In North Ferriby, Bronze Age boats were discovered in the 1930s, one of the most important finds of maritime archaeology. In fact, Ferriby Boats proved that more than 4,000 years ago, humans were capable of crossing oceans! They are now on display in the National Maritime Museum in Greenwich, and a replica can be viewed in the Hull and East Riding Museum. A memorial plaque can be found at the original site. North Ferriby is linked through the Twinning Association with Le Pellerin, a pretty French village situated on the Loire estuary.

There are plenty of grand properties with spacious gardens for commuters and affordable properties for new families and down-sizers in Hessle. Woodfield and Southfield have fine examples of Edwardian properties within walking distance of Hessle Train Station. Many properties have Humber estuary views. On Riverside Court, there are 2 bedroom terraces and 2 bedroom penthouses situated in St Mary’s Close on the foreshore. Beverley Road has some stunning traditional semi-detached homes with open plan kitchens, and Boothferry Road has starter homes close to all the local amenities.

Swanland has countless new, modern 3 and 4 bedroom detached homes like those in West Leys Road, close to outstanding schools and North Ferriby Station. In Swanland, grand homes are situated on Kemp Road and large 3 bedroom bungalows on Mill Road. Stapleton Court has a collection of 2 bedroom apartments for down-sizers who won’t compromise on luxury and retirees who want independent living.

North Ferriby has some large, detached properties on White House Garth and Humber Road. These are unique period properties dating back to the 19th century. New Walk has semi-detached bungalows and Hellyer Close, modern apartments.

Schools and Colleges in Hessle, North Ferriby and Swanland

This area is fortunate to have outstanding early childcare, and Ofsted has rated Swanland Primary School ‘Outstanding. In North Ferriby, the South Hunsley High School and Sixth Form College have established a reputation of strong academic performance and consistently outperforms local and national schools. The Hessle Mount and Tranby independent schools are also within close distance.

Things to do in Hessle, North Ferriby and Swanland

Swanland Pond is at the centre of Swanland village and is much admired by both residents and visitors. Despite no longer being the home for swans, the villagers have recommended re-naming the pond ‘Duckland’ because there is never any shortage of ducks visiting!

Situated in Hessle and adjacent to the Humber Bridge and river, Humber Bridge Country Park’s site has a long history of chalk quarrying dating from the 1200s. In the wood, the ash trees are nurtured for insects and nesting birds, and the elder and crab apple trees provide food for native and migrating birds.

Swanland Park is great for youngsters, with plenty of swings, slides, rocking horses and traditional rides to keep them occupied. Nearby is a vast playing field to enjoy a game of cricket, football, or rounders or perhaps an afternoon picnic.

The Hessle Whiting Mill is an early example of a 19th-century whiting windmill where you can look inside and learn about how the mill operated In its prime. Next door is the Chalk Walk Heritage Trail, where you can learn about the history of Humber Bridge Country Park and the former chalk quarry that once supplied the mill with chalk.

The official starting place of the Yorkshire Wolds Way walk is at Hessle. The walk consists of a 21.6-kilometre trail to South Cave for walking enthusiasts, bird watchers and nature lovers. Just before the path leaves the foreshore and enters the Yorkshire Wolds, you will discover the remains of three Bronze Age boats, preserved for nearly 4,000 years.

The Hessle Skatepark comprises medium-sized concrete ramps on a tarmac base that aren’t too daunting for beginners and surrounded by greenery. The skatepark consists of a back and forth run with quarter pipes and fun boxes.

Teamsport Go Karting Hull is an ultra-modern karting track and flyover and has crazy golf on the premises. The karts themselves are state-of-the-art, well-maintained and have plenty of adjustments for different sizes.

The Welton Waters Adventure Centre is open all year round, with plenty of activities to choose from. No membership is required, and visitors can partake in sailing, kayaking, paddle-boarding, or join Archery and bush-crafting sessions.

By travelling the A1033, you are en-route to the Spurn Heritage Coast coastal nature reserve, which stretches three and a half miles into the Humber Estuary. The area has become a hotspot for birdwatching enthusiasts, with many rare bird sightings, and there is a lighthouse to visit.

Shopping and Leisure in Hessle, North Ferriby and Swanland

Hessle has a Sainsbury’s supermarket and café along with an Argos store, and there’s also a Tesco Express and First Lane convenience store here. In The Square, Cartmell Menswear caters for men’s clothing, the Grey’s Menswear on The Weir provides more choices, and there’s an Innes Furniture Store. There are plenty of independent women’s boutiques, too, including Coco and Mimi Boutiques and Poppy’s of Hessle. The Over The Moon candle shop, Vanilla, and The Little Company are all independent gift shops. North Ferriby High Street has a Co-Op Food, and Swanland has a Morrisons Daily convenience store, a Boots and Morley’s butchers for beautiful, local cuts of meat.

Delicious food awaits you at Birdcage in Hessle with its outstanding food and stunning scenery. The Weir Road has food fit for royalty at The Greek and Prestongate Street is where you will find Sumo Pan Asian with various types of delicious Asian cuisine, from Japanese to Chinese. Cáscara has a three-course menu, and Sunday roasts to tickle the tastebuds. In Hessle Road, the Hessle Tandoori is one of the best Indian restaurants, and China Garden has been a prominent restaurant in the area for many years. The Stanley Asian Restaurant on Hull Road has a lovely range of food from the classics to fancier fishes. In North Ferriby, Medici Italian restaurant has succulent meats and meals packed with flavour.

There are some delightful, friendly pubs in the area, such as Darleys, with its splendid decor, and the Norland cooks up fully loaded breakfasts and decent pub grub. The Hase is a local bar with a varied selection of ales and the best Sunday lunches, and The Pourhouse has a rotating selection of draught cask beers and an extensive bottle list. Harry’s Bar is always lively, and there’s a great atmosphere and mix of music at Marquis of Granby. The Swan and Cygnet in Swanland offers a fine drinking and dining experience, while there is a wonderful beer garden at North Ferriby’s Duke of Cumberland pub.

The closest cinema is just over a 10-minute drive to Hull and is the ODEON Luxe with nine screens including a 3D option and free parking. A 13-minute drive away is The Reel Cinema Hull. Middleton Hall is a versatile venue that hosts classical music concerts as well as a surround-sound cinema. Along the A63, you are en-route to The Hull New Theatre, which dates from 1939 and previews kids shows, dramas, and musicals.

In Hessle, the Hessle Leisure Centre, and Your Next Level Fitness both offer motivational atmospheres. Gymaphobics is a supportive gym for women and personalised to every individual’s needs. The King George V playing field is the location for Hessle Sporting Club Football, and next door, the Lawn Tennis Club. Hessle Cricket Club welcomes new players! At North Ferriby, there is a karate club, and in Swanland, TWS Wellness offers one-to-one personal training and yoga, with mixed-ability classes.

The Hessle Town Hall is enjoyed by visitors and regulars for its many classes and concerts and has proved to be a popular gig venue for local bands and singers. Jean’s Walk is a stroll along the Hessle Foreshore, known for its views of the Humber, its bridge and shipping. The path is named after Jean Hartley, a close friend of the poet Phillip Larkin, who regularly walked the route. Near the Humber bank by North Ferriby, there is a Ferriby Boat Memorial dedicated to the discovery of the ancient boats from 4,000 BC. Not forgetting, just south-west of North Ferriby, the Hull Kingston Rowing Club, the only community rowing club of North Yorkshire.

The area is lucky enough to have two local train stations, including the Hessle service to Hull, in under 10 minutes. Easy access to the A63 and M62 makes travel to major northern cities by car very efficient. Buses take you into Hull, the surrounding villages, and local attractions in the area.

Train The area is served by two train stations, Ferriby and Hessle, operated by the northern line service. Each station provides frequent fast trains into Hull and to York, Doncaster, and Scarborough.

Road The A63 cuts through North Ferriby and Hessle and merges onto the M62, a key motorway into other major cities of northern England. The A164 along Swanland reaches up past Cottingham into Beverley.

Air Doncaster Sheffield Airport is under an hour’s drive away via the M62. Also, via the M62 is Leeds Bradford Airport which is one hour 30 minutes by car.

Ferry It’s a 20-minute drive to P&O Ferries in Hull to catch the ferry to Rotterdam in the Netherlands.

Bus Hessle Square in the centre of Hessle town has the 57 bus to Bilton village and the 82 to Sutton Ings in east Hull. Hessle’s 66 runs all around Hessle, and the 152 goes to the Humber Bridge Country Park. On North Ferriby High Street, the 143 goes to Beverley village, and Swanland has the 150 and 153 buses into Hull.

5 fun, interesting, quirky facts to use throughout

Go back to the area guide